The relationship that develops between a brother and a sister is one that can never be replicated and cannot be adequately expressed via words. The bond that exists between siblings is one of the most special relationships in the world, and people over the globe place a high value on this connection.

However, when it comes to India, the relationship takes on an even greater level of significance as a result of the fact that there is a holiday known as “Raksha Bandhan” that is specifically dedicated to the love shared between siblings.

This is a very significant Hindu holiday, and it is observed not only in India but also in other South Asian nations like Nepal. It is meant to represent the affection that exists between brothers and sisters.

Raksha Bandhan is an event that is commemorated on the Hindu luni-solar calendar during the month of Shravana, which corresponds to the month of August on the Gregorian calendar. This day coincides with the day that the moon is in its full phase.

If you are Indian or planning to get your Indian visa for US citizens, you should check the date of Raksha Bandhan. And if you are in India during the days, don’t miss out on this beautiful Hindu cultural festival.

What is Raksha Bandhan?

The celebration is known as “Raksha Bandhan,” which is a combination of the two syllables that make up its name. According to the vocabulary of Sanskrit, the celebration is referred to as “the tie or knot of protection,” where “Raksha” stands for protection & “Bandhan” indicates the verb “to bind.”

The celebration as a whole is meant to represent the unending love that can exist between brothers and sisters, despite the fact that this love is not limited to simply those who share the same blood.

In addition to that, it is celebrated by cousins, sisters and their sisters-in-law (known as bhabhi), aunts and nephews related by the maternal side (known as bua and bhatija), and other relatives in similar situations.

Another Indian festival is Holi. Here you can learn about what is Holi festival.

The Spiritual Significance of the Raksha Bandhan Festival

The festival is mostly observed by adherents of the Hindu religion in the western and northern regions of India, as well as in neighboring countries such as Nepal and Pakistan, as well as the island nation of Mauritius.

The festival is also treasured by members of the Jain community, who receive ceremonial threads from Jain priests as a token of their devotion during this time.

This festival, which is dedicated to the love that exists between brothers and sisters, is known in Sikhism as “Rakhardi” or “Rakhari,” and it is celebrated by Sikhs.

Why do Indians Celebrate Raksha Bandhan?

Raksha Bandhan is a festival that is celebrated as a sign of obligation between siblings, specifically brothers and sisters. The event is intended to commemorate any form of brother-sister relationship between males and females, regardless of whether or not they share a biological connection.

On this particular day, a sister prays for her brother’s financial success, physical health, and overall well-being by fastening a rakhi bracelet around the latter’s wrist.

In exchange, the brother bestows gifts upon his sister and guarantees that she will be safe from any harm and unaffected by the situation in which they find themselves.

In addition, the holiday is a time for brother-sister relationships to be honored, whether they belong to distant family members, relatives, or cousins. Check out all the requirements and the process of getting an Indian visa for Bulgarian citizens.

Raksha Bandhan Festival and Its Origins

There are a number of legends surrounding the celebration of the unique festival which is known as Raksha Bandhan. It is said that this particular holiday dates back hundreds of years.

The following is a description of some of the many different accounts that are associated with Hindu mythology:

Lakshmi, the Goddess, and King Bali

According to the Bhagavata Purana and the Vishnu Purana, when Lord Vishnu defeated the demon King Bali and took control of the three worlds, Bali invited Vishnu to remain in the palace with him. Lord Vishnu graciously accepted.

The Lord complied with the request and soon began to share his home with the demon king. On the other hand, Goddess Lakshmi, who was married to Lord Vishnu, desired to go back to her husband’s homeland of Vaikuntha. As a result, she took the rakhi and fastened it around the wrist of Bali, the demon king, therefore transforming him into a brother.

When Goddess Lakshmi inquired about the return gift, she requested that her husband be released from the promise and that he be allowed to return to Vaikuntha. The request was granted by Bali, and Lord Vishnu and Goddess Lakshmi made their way back to their dwelling together.

It is stated that Shubh and Labh, who were Lord Ganesha’s two sons, were dissatisfied with the fact that they did not have a sister. They begged their father to give them a sister, and thanks to Saint Narada’s intercession, he eventually complied with their request.

Because of the heavenly flames, Lord Ganesha was able to bring Santoshi Maa into existence. As a result, Lord Ganesha’s two sons were able to receive their sister on the day of Raksha Bandhan. 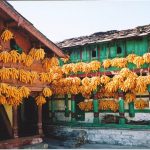 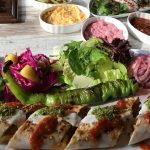